Menu
Change Over Time is a semiannual journal publishing original articles on the history, theory, and praxis of conservation and the built environment. Each issue is dedicated to a particular theme as a method to promote critical discourse on contemporary conservation issues from multiple perspectives both within the field and across disciplines. Themes are examined at all scales, from the global and regional to the microscopic and material.
Browse: Home   /   Author Biographies 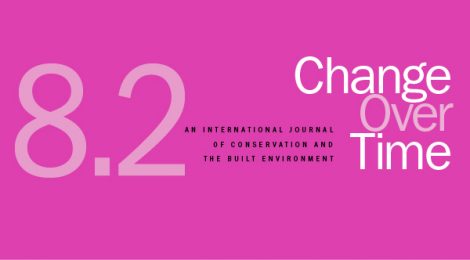 James Michael Buckley is an Associate Professor and Director of the Historic Preservation Program at the University of Oregon Portland. Buckley previously taught in the urban planning programs at MIT and the University of California Berkeley and he was involved for many years in the development of nonprofit low-income housing in the San Francisco Bay Area. He is a former member of the San Francisco Historic Preservation Commission and a current board member of San Francisco Heritage.

Gail Dubrow is Professor of Architecture, Landscape Architecture, Public Affairs & Planning, and History at the University of Minnesota. She is the author of Sento at Sixth and Main, with Donna Graves, and coeditor of Restoring Women’s History through Historic Preservation with Jennifer Goodman. Her current research project, Japonisme Revisited, reexamines the American Japan craze from the standpoint of three architects of Japanese ancestry; it received support from the American Council of Learned Societies, Smithsonian Institution, and the Huntington Library. Dubrow wrote one of the first articles about historic preservation of LGBTQ sites “Blazing Trails with Pink Triangles and Rainbow Flags” in 1998.

Susan Ferentinos is a public history researcher, writer, and consultant, specializing in the history of gender and sexuality. She is the author of Interpreting LGBT History at Museums and Historic Sites (Rowman & Littlefield, 2015), which won the 2016 National Council on Public History Book Award. Ferentinos has worked on a range of LGBTQ historic preservation projects, including preservation documentation for the Alfred Kinsey House in Bloomington, Indiana; a historic context statement for LGBTQ history in Maryland; and a survey of potential National Historic Landmarks related to LGBTQ history in the northeastern United States.

James Lesh researches urban history and heritage conservation. In 2019-20, he is a Postdoctoral Research Associate at the University of Sydney, where he will be preparing a monograph on Australian urban heritage since the late-nineteenth century His PhD thesis, completed at the University of Melbourne in 2018, explores global histories of urban preservation, with the Australian city serving as its case study. Aspects of this research appear in recent articles in the Journal of Urban History and the International Journal of Heritage Studies. James was the research officer on the “Rainbow Jews” project while studying for his MA at Queen Mary University of London.

Karen Loew is a journalist and urbanist in New York City. Her articles have been published in CityLab, Next City, The Atlantic, The New Yorker, and elsewhere. Currently an adjunct lecturer in journalism at City College, CUNY, she is also a past editor-in-chief of City Limits and associate editor at the Forward. She has contributed to a variety of neighborhood preservation efforts in Manhattan, and directed and produced two site-specific short films. She has a BA in English literature from the University of Virginia.

Ken Lustbader is a Co-Director of the NYC LGBT Historic Sites Project, the first cultural heritage initiative and educational resource to document historic sites connected to the LGBT community in New York City (www.nyclgbtsites.org). For over 25 years, he has been one of the national pioneers in issues related to LGBTQ place-based history. His involvement in the topic began in 1993 when he authored “Landscape of Liberation: Preserving Lesbian and Gay History in Greenwich Village,” for which he received the 1993 Outstanding MS Historic Preservation Thesis award at Columbia University. Between 2007 and 2015, he served as Historic Preservation Program Director at the J.M. Kaplan Fund. Prior to that he was lead consultant for the Lower Manhattan Emergency Preservation Fund, which advocated for the conservation of in situ elements of the World Trade Center. Between 1994 and 2002, he was the Director of the New York Landmarks Conservancy’s Sacred Sites Program.

Mark Robbins is president and CEO of the American Academy in Rome, a leading international center for independent study and advanced research in the arts and humanities. Robbins has…

Visit Project Muse to read other articles featured in this issue.